Home  >  Community  >  Air Quality  >  Air Quality and Health  >  Asthma
Asthma is a chronic (long term) and potentially fatal disease caused by inflamed airways of the lung which restricts airflow. The red, swollen lining of the air passages increase the sensitivity of airway nerve endings so they become easily irritated. Muscles around the airways become sensitive and start to twitch and tighten which further narrows the airways. 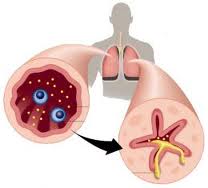 The disease is characterized by recurrent attacks triggered by such things as cold air, pollen, smoke and other types of air pollution. Symptoms include shortness of breath, tightness in the chest, coughing and wheezing. There is no set pattern for these symptoms and they can vary in severity and frequency from person to person and even from hour to hour in the same individual. This makes clinical and objective diagnosis difficult and inconsistent which makes estimating population-based prevalence and severity difficult. However, the methodology of surveys is always improving and their results continue to be a valuable component of understanding population health. Over three million Canadians, including thousands of British Columbians, have asthma. Every year 500 adults and 20 children in our country die because of asthma. That's 10 deaths every week and one of those is from B.C. Health care expenditures in Canada for respiratory disease are 12 billion dollars per year (2010). In 2014, 8.1% of Canadians 12 or older reported being diagnosed with asthma by a health professional. That is about 2.4 million people having reported asthma. A number that has remained steady since 2001. In 2014, 9.2% of females and 7.0% males reported they had asthma. In British Columbia 7.2% of residents reported having asthma.

Rates of asthma are usually higher for children and youth. When they grow into adults they may not suffer from it. In 2014, males aged 12-19 had higher rates of asthma than those aged 35-44 or 55-64. The rates were fairly similar between age groups for females.

Some of us can stand much higher levels of air pollutants than others. Levels of, for instance, particulate matter, nitrous oxides or ozone that would have no apparent effect on non-asthmatics can trigger disastrous effects in those who suffer from asthma. That is reason enough for us to increase sensitivity to how, when and why we are adding pollutants to our air and commit to the avoidance of producing them in the first place. For more information on asthma visit: Canadian Lung Association Website Asthma Society of Canada Fact Sheet References: https://www.lung.ca/asthma http://www.asthma.ca/corp/newsroom/pdf/asthmastats.pdf http://www.statcan.gc.ca/pub/82-625-x/2015001/article/14179-eng.htm
Return to Top
Governance
Agendas & Minutes Bylaws Calendar of Events Contact Finance Notices Electoral Area Boundaries
Community
Emergency Preparedness Fire Departments Parks and Trails Regional District Information Sproat Lake Marine Patrol
Business
Business License Population Statistics
Planning & Development
AV Agriculture Plan Building Inspection Maps OCP Planning Process Zoning Bylaw
Services
Airports Waste Management Recycling Schedules Water Systems