Home  >  Community  >  Air Quality Council Web Directory  >  What are the Main Sources of Air Pollution?  >  Smoke Pollution  >  Slash Burning and Wildfires
SLASH BURNING Logging operations on Vancouver Island result in a tremendous amount of waste, including reject logs, leftover tree limbs, tops, and other residues. Due to the risk of forest fires, logging companies around Port Alberni use burning to dispose of slash, in accordance with the Wildfire Act and Wildfire Regulation. Slash burning is subject to the Open Burn Smoke Control Regulation. The intention of forestry burning regulations is to restrict burning to good venting days, maximize combustion temperatures, and minimize smoke pollution. Unfortunately, even when these conditions are met, the size and prevalence of these fires every fall is disturbing to the public, who are constantly being asked to reduce their own burning activities. Broadcast burning of waste left strewn over a logged area requires a burn plan and is covered by the Wildfire Act. At times, wood debris from log sorts is disposed of through open burning. Stumps and roots encrusted with mud may be burned, resulting in dense smoke. This kind of burning is currently allowed through permitting, but may be subject to the Open Burning Smoke Control Regulation in the future. Related Links: Regulations and Bylaws on Outdoor Burning WILDFIRES Every year in BC there is an average of 2000 wildfires. About half of them are caused by people, and just over half are caused by lightning. For example, during the severe fire season of 2010, 100,000 hectares burned within a 24 hour period in the Cariboo-Chilcotin region. Air quality was effected across the province including Port Alberni, where an air quality advisory was issued from smoke movement over the coast. 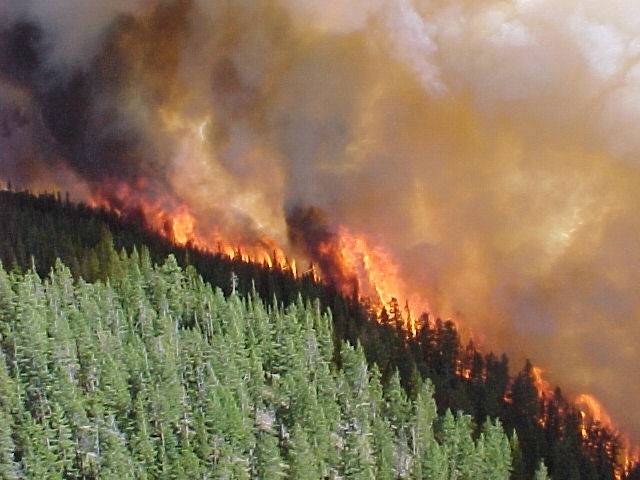 In a ten day pollution spike during August, 2010, Williams Lake suffered fine particulate matter pollution in the order of 250 ug/m3. Prince George went up to 150ug/m3. During these events, people with respiratory diseases can be at risk. More prescriptions, emergency visits, and hospital admissions occur on those smoky days. People with respiratory disease can prepare for these seasonal emergency events by making sure they have medication on hand before the fire season. They should also consider buying a HEPA filter air cleaner , which can help reduce smoke pollution that enters the home. There should also be designated public clean air shelters in the community such as air-conditioned shopping malls or community centres. In 2015 there were about 1,800 wildfires in BC. Two thirds of which were caused by lightning and one third caused by people. The threat of fire and resulting smoke exposures require careful emergency planning for the Port Alberni area, especially during the fire season, when it is not uncommon for the valley and surrounding hills to become tinder-box dry with temperatures reaching 40 degrees C. The Dog Mountain fire at Sproat Lake caused a rapid increase in particulate matter in the Alberni Valley from July 5 to July 9, 2015. Resources:
wildfire statistics
envistaweb For great information on current and past fires in BC go to:
bcwildfire.ca/ During the fire season, the Western Canada BlueSky Smoke Forecasting System predicts hourly smoke concentrations from wildfires for up to 48 hours. Forecasts are updated daily and can be viewed at: www.bcairquality.ca/bluesky/
Return to Top
Governance
Agendas & Minutes Bylaws Calendar of Events Contact Finance Notices Electoral Area Boundaries
Community
Emergency Preparedness Fire Departments Parks and Trails Regional District Information Sproat Lake Marine Patrol
Business
Business License Population Statistics
Planning & Development
AV Agriculture Plan Building Inspection Maps OCP Planning Process Zoning Bylaw
Services
Airports Waste Management Recycling Schedules Water Systems