West Coast unauthorized camping crackdown
Citizens of Vancouver Island's west coast are asking all overnight vehicle and tent campers to make a reservation at an authorized campground before arriving on the West Coast.
Emergency Support Services grant funding awarded
The ACRD receives a 2022 Emergency Support Services grant from the Union of BC Municipalities
ACRD seeks input on Maplehurst Park
next
Loading...

Home  >  Community  >  Air Quality Council Web Directory  >  What is Air Pollution?  >  Past Particulate Matter Sampling
TSP SAMPLERS Before 1991 PM was measured using Total Suspended Particulate (TSP) samplers. The Court House site (4th and Angus) was one of the oldest monitoring sites for fine particulates in the provincial network, with measurements dating back to February, 1985. PM 10 SAMPLERS After 1990 PM analysis was based on PM10 sampling. From 1992 to 1995 three PM10 samplers were placed at the Courthouse, Auto Marine, and the Fire Hall. TEOM In early 1996 a permanent PM 10 sampler called a Tapered Element Oscillating Microbalance (TEOM), was installed at the Harbour Quay and the other samplers were removed. The TEOM provided continuous measurements of PM10 levels until 2011. It was managed by paper mill as part of its permitting obligations. EBAM In January, 2007, in an effort to provide better air quality data, the Air Quality Council and the Ministry of Environment installed a special piece of PM 2.5 sampling equipment called the E-BAM Mass Monitor on top of the Alberni Elementary School. It provided valuable air quality data from September, 2007 to December 2009. TEOM and EBAM readings for January 2008 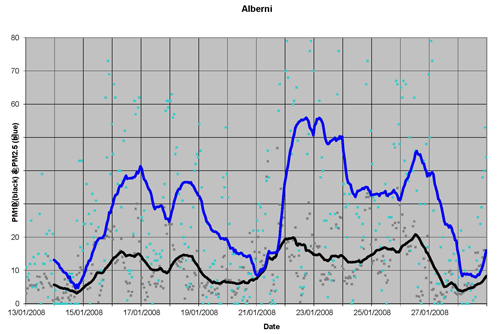 The blue line in this graph represents PM 2.5 data generated by the EBAM monitor on top of the Alberni Elementary School. The black line represents PM 10 data generated by the TEOM monitor at the Harbour Quay. Although PM 2.5 typically makes up about 60% of the PM 10, this graph indicates that the TEOM is underestimating ambient particulate matter. Due to TEOM mechanics, this was particularly true during cold, smoky weather. The TEOM’s location on the water and related marine venting also caused underreporting of ambient particulate matter levels. EBAM daily PM 2.5 averages The following graph shows high PM 2.5 concentrations during an extended inversion period in January, 2008. During that month, values were over the Canada Wide Health Reference Level 70% of the time and over the Provincial Air Quality Objective 40% of the time. 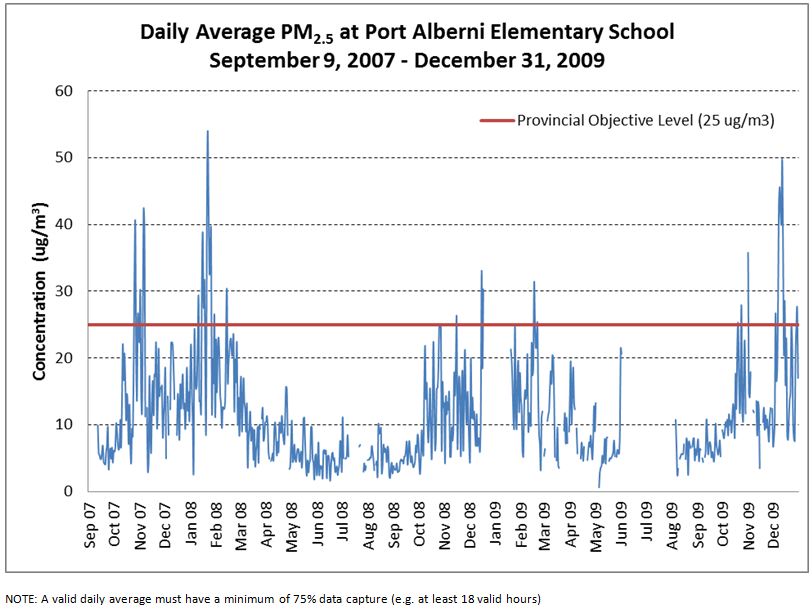