The Alberni Basin Airshed is a valley surrounded by mountains that opens directly at one end to marine influences. Resulting wind patterns exert a venting influence on the airshed, although seasonal inversion conditions can trap valley air for days on end. 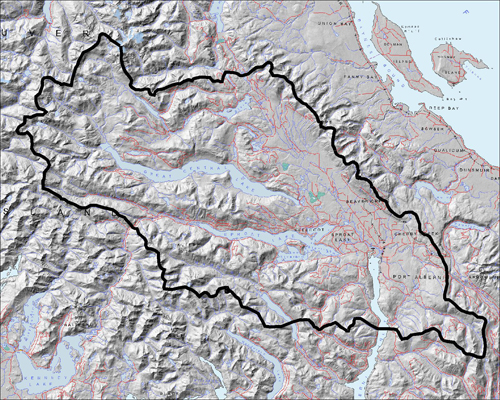 The valley stretches from the head of the Alberni Inlet in a northwest direction for 40 km and is 8 to 12 km wide. The leeward mountains, known as the Beaufort Range create an impressive eastern wall with Mt. Arrowsmith being its most prominent feature behind the town site. The windward Vancouver Island Mountains wrap around the west side, from which emerge Great Central and Sproat Lake. These feed the Stamp and Somass rivers that cut through the middle of the valley floor. Although local pollution, topography, climatology, and meteorology give rise to specific Alberni Basin airshed characteristics, the air itself is transient and, on a larger scale, flows eastward into the Georgia Basin. About 25,000 people share the airshed, three quarters of which live in and around the city of Port Alberni. The region falls within the jurisdiction of the Alberni-Clayoquot Regional District and is home to the Hupacasath and Tseshaht First Nations. For decades, the Alberni Basin Airshed was exposed to heavy industrial pollution that was generated within the main population base. Since 1989, there have been tremendous improvements made to air quality in the Alberni Basin. As individuals and companies are led into a new awareness of the links between air pollution and its health effects, increasing value is being placed on air as a common property resource, and on clean air as fundamental to human and environmental health.

The Port Alberni Airshed, as with many others in British Columbia, is characterized by frequent thermal inversions during the winter months. These are often marked by low-lying fog, which literally caps the valley and can be seen as such when viewed from higher up the mountain slopes.

In a normal atmospheric profile, the temperature decreases with height. However, the mountains that ring the valley bowl can lose heat energy at a rate greater than the overlying atmosphere. The resultant heavy, colder air drains like fluid down the slopes and accumulates in the valley bottom. Air pollutants become trapped under the inversion 'lid' and, if weather conditions persist, can become very concentrated. From a health perspective, then, it is especially important during the winter months to minimize air pollution. Famous Cautionary Quote: "In summary, the variable and light winds inhibit the horizontal movement of airborne pollutants out of the Alberni area, and inversions decrease the vertical dilution of contaminants, while precipitation influences water quality. As a result, Port Alberni is one of the poorest locations in Canada for diluting and dispersing airborne pollutants." Taken from The Somass River Estuary Status of Environmental Knowledge to 1980, a report published by Fisheries and Oceans and Environment Canada.

When PM 2.5 concentrations exceed the Provincial Air Quality Objective of 25 ug/m3 at the Alberni Elementary School air monitoring site and are expected to persist, an air quality advisory will be issued by the Ministry of Environment. The advisory informs the public about degraded air quality so they can make informed choices about reducing their exposures and so they can do their part to reduce emissions. Air Quality can become degraded as a result of local emissions building up to unacceptable levels. It can also be influenced by natural events such as wild fires. For example, an air quality advisory was issued in Port Alberni on January 3, 2017. Weather conditions combined with significant burning caused high concentrations of fine particulates to build up in the valley. Following is a graph showing a period when advisories were issued in Courtenay and Duncan, but were not necessary in Port Alberni due to adequate dispersion venting.

Air Quality Advisories are posted on the home page of:
bcairquality.ca and are announced to the public through local media.

The venting, or ventilation index, is a numerical value related to the potential of the atmosphere to disperse airborne pollutants, such as smoke. Here is an example of venting categories, based on a scale of 0 to 100: 0 - 33 Poor Ventilation
34 - 54 Fair Ventilation
55 - 100 Good Ventilation Burning may be restricted when the forecasted venting Index is poor or fair, as these categories are not conducive to dispersion. The Open Burn Smoke Control Regulation (OBSCR) restricts the times and conditions allowable for open burning. For example, open burning can only be initiated on a day when the venting index forecast is good for that afternoon, and good or fair the following afternoon. For more information and the current venting index go to: Venting Index Interactive Map Ventilation Index (The current venting index for Port Alberni is the one listed for Central Vancouver Island (CNTRL VAN ISLD).)

The AQHI is a multi-pollutant index that was developed to provide British Columbians with an estimate of the short-term health risk caused by degraded air quality. Health risk categories are low (1-3), moderate (4-6), high (7-10) or very high (10+), corresponding with numbers from 0 to 10 or higher. The index can be used, especially by those with compromised health, to inform decisions regarding, for example, reducing activity levels when the air quality is poor. The AQHI rating is based on the combination of health risks from each of the pollutants identified to be included in the index. For example, a region like the lower mainland of Vancouver is heavily influenced by vehicular exhaust and the accompanying, relatively high levels of Nitrogen Dioxide and Ozone. The AQHI for that area, then, is based on monitoring for PM 2.5, as well as Ozone and Nitrogen Dioxide. A multi-pollutant index is not always helpful in providing a health risk assessment and that is partly why Port Alberni does not have one. Our health risk assessments are based on one parameter, PM 2.5. That is because, in this area Ozone and Nitrogen Dioxide levels are relatively low. PM 2.5, however, can be very high during the winter. The health risk of that PM 2.5 would be greatly reduced if it was combined with the low risk from O3 and NO2, defeating the whole purpose of the AQHI.
Return to Top
Governance
Agendas & Minutes Bylaws Calendar of Events Contact Finance Notices Electoral Area Boundaries
Community
Emergency Preparedness Fire Departments Parks and Trails Regional District Information Sproat Lake Marine Patrol
Business
Business License Population Statistics
Planning & Development
AV Agriculture Plan Building Inspection Maps OCP Planning Process Zoning Bylaw
Services
Airports Waste Management Recycling Schedules Water Systems