Home  >  Community  >  Air Quality Council Web Directory  >  Air Quality Council of Port Alberni  >  AQC Project History
PROJECT I - CLEAR THE AIR In the winter of 2003/ 2004, with some funding from the Vancouver Island Health Authority, a public education campaign was undertaken called Clear the Air, the goal of which was to minimize wood smoke through better burning practices, especially with regards to residential wood heating. This was a topic everyone could get behind, a project that would walk people through the basics of airshed dynamics, and one that would assist multi-stakeholder participation. There was also a separate research component to this project that involved the production of two foundational airshed reports and a set of recommendations for future actions. These reports were influential in refining the AQC Mission Statement and Goals. PROJECT II - FINE PARTICULATE SAMPLING In the winter of 2004/2005 the AQC embarked on a fine particulate sampling project which resulted in a paper co-authored by Warren McCormick, our Ministry of Environment member, and the AQC. It involved the deployment of PM 2.5 filtration samplers in 6 areas of Port Alberni to see if there were any significant air quality differences between different neighborhoods. Warren provided the scientific expertise needed and secured most of the funding for the samplers and for the sample analysis. AQC members supplied volunteer labor for 2 months of every other day collections, machine calibration, and maintenance. The data analysis from this study points to a number trends. For example, during the cold, dry sampling period of 2005 residential areas had consistently higher particulate matter pollution due to smoke from wood stoves. Sites near highways showed higher ambient levels at all times, most likely due to vehicle exhaust. During one 24 hour sampling period, someone in a yard near one of the monitors fired up a burn pile causing extremely high readings. Pollution spikes like this one can trigger serious health effects, especially in those who are more sensitive due to, for example, asthma. 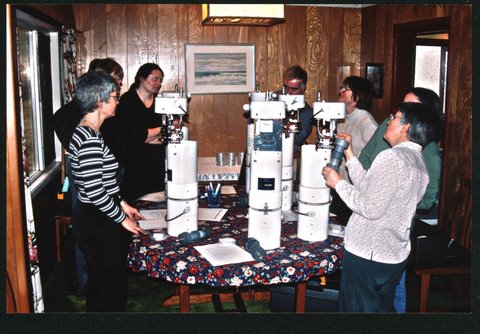 One of the results of this research for Port Alberni was the placement of better air quality monitoring equipment (EBAM PM 2.5 sampler) in a better location (Alberni Elementary School). It has also provided a scientific basis for appealing to the public and politicians for social and policy changes regarding smoke and vehicle exhaust reduction. The final project report, which was presented to both the City Council and the Regional District, was pivotal in establishing the AQC as a credible and effective working group. Fine Particulate Sampling Project in Port Alberni in pdf Air Quality Council Co-authors Scientific Paper in pdf PROJECT III - BACKYARD BURNING In 2005, with funding from the Ministry of Environment, the AQC mounted a public awareness campaign primarily to reduce backyard garbage burning. A brochure was developed for the region and launched during Port Alberni's largest venue, its fall fair, along with other educational materials on reducing smoke from residential wood stoves. During this project new working relationships were forged with the City Fire Department, and the local Conservation Officers. The brochure was officially distributed by the city and the regional directors to all of the Alberni Valley residents. You Burn It, You Breathe It brochure in pdf Article - Toxicity of Garbage Smoke in pdf This project had a research component in the area of Solid Waste Management. The AQC reviewed the region's 1996 Solid Waste Management Plan and compared it to that of a number of other districts with a view for improvements. A summary report with a list of recommendations for action were produced and presented to the Regional Directors, their new Environmental Manager, and, eventually, to a consultant hired to conduct an official review and revision of the Solid Waste Management Plan. PROJECT IV - PROPOSAL FOR PILOT DIOXIN TESTING For the 2006/2007 period, the AQC identified air quality management planning, vehicle emissions reduction, and dioxin research as areas for possible work and funding. A number of grant applications were pursued and, although funding was not forthcoming, dioxin research became the main focus for that period. The inspiration for the work came from knowing how toxic, persistent, and bioaccumulative dioxin/furan emissions are; knowing that coastal pulp and paper producers are amongst the highest dioxin/furan generators in the country; and knowing how inadequate our present testing procedures and protocols are. (Results from single tests on any of the coastal power boilers vary by a factor between 5 and 45 - presenting difficulties for many of the mills in ensuring compliance with the current Canada Wide Standards limit.) The AQC, along with the Ministry of Environment, hosted a series of multi-stakeholder talks to explore the possibilities of using funding generated in the Crofton area to execute a pilot dioxin sampling project using Best Available Technology for the Crofton Catalyst mill. A representative from the German company, Becker Messtechnik, was engaged to educate the group regarding the operations and costs of using their Adsorption Method for Sampling of Dioxins and Furans (AMESA). A project team was selected, with Catalyst's Crofton Environmental Manager as the Project Manager and a representative from Paprican (Pulp and Paper Research Institute of Canada), as research lead. Unfortunately, the group could not continue to engage Paprican without an indication of strong support from Environment Canada, which was not forthcoming. Within a few months of winding up our effort, Catalyst withdrew their Paprican membership and the dioxin project file was closed. PROJECT V - AIR QUALITY EDUCATION In late December 2007, the AQC was awarded funding from the Ministry of Environment for the design and delivery of primary and public air quality education programs and for its ongoing research and operations (including participation in a number of provincial forums and policy/intention papers). Special air quality sampling using a portable device called a Nephelometer was conducted in the early part of 2008. A short course on air quality dynamics and related issues in the Alberni Valley was presented at North Island College as part of their Continuing Education Program. The main project focus was the development, over a period of months, of an air quality science and health curriculum, which was delivered in the spring of 2008 to two grade five classes at the Alberni Elementary School. The weekly class focus was extended to the wider community through pre-arranged media coverage and an integrated article series written for the Alberni Valley Times. GRADE 5 AIR QUALITY AND HEALTH PROGRAM 1) Respiration biology, the oxygen-carbon cycle, and related health issues 2) The Alberni Basin Airshed. 3) The EBAM PM 2.5 sampler placed on top of the school. 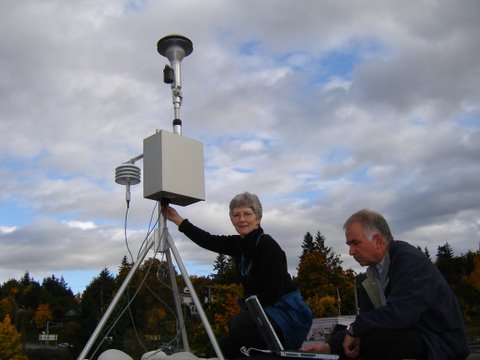 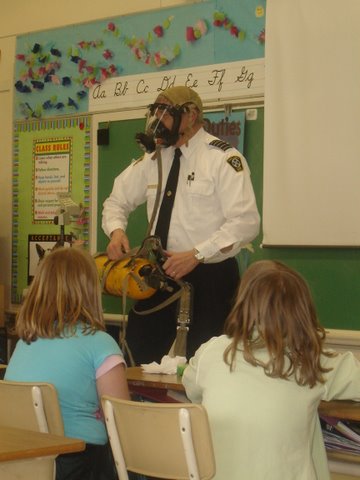 Past Fire Chief, Larry McGifford, dawning a Scott Air-Pack to help impress upon
the children that "When you can't breath nothing else matters." 6) With Guest, Dr. Smecher, real heart and lungs samples from the David Hardwick Pathology Learning Centre (VGH) were examined for a very impressive look at what air pollution, particularly smoking, can do to our tissues. Although the negative effects of their own possible decision to smoke were emphasized, the children were also given a list of the immediate and long-term positive effects that any smoker can enjoy once they quit. (which led to a few parents quitting, I am told). What Happens When A Smoker Quits? 8 Dramatic Health Improvements in pdf Article - Smoking a Childhood Disease in pdf 7) An outdoor, hands on look at some vehicle emission reduction measures. Guests included a SD 70 mechanic in a retrofitted bus, a neighbor in her Smart Car, a Prius owner with his vehicle and all of his non-gas-fired garden equipment, and a bicycle commuter. 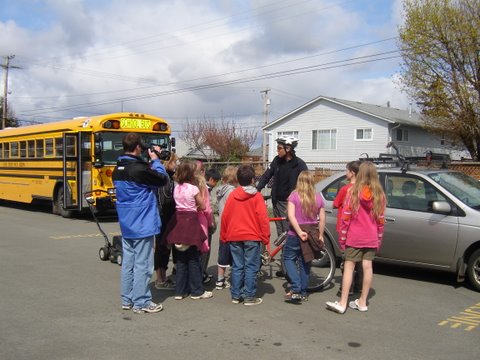 John Mayba gives some examples to students about how he has reduced vehicle exhaust pollution by choosing
to ride a bike, drive an electric car, and use a push lawn mower 8) Idle Free Campaign - After lessons regarding the health effects of exposure to vehicle exhaust from traffic and needless idling the children went outside to witness the installation of Idle Free signs around the perimeter of their school. 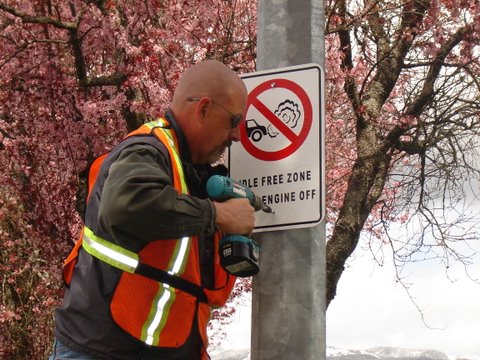 City Maintenance worker installs permanent Idle Free Zone signs around the Alberni Elementary School. Article - Idle Free Elementary in pdf IDLE FREE BC Facts and Myths About Idling 9) A full school assembly took place at the end of the program, focusing on recycling, healthy living, and the planting of trees (bought with money the children raised the previous year) to help filter the dirty air from highway traffic that spills onto one of their playgrounds. 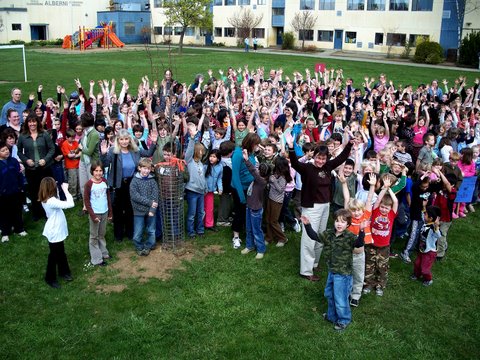 Alberni Elementary School Assembly Closes Air Quality Program PROJECT VI - PORT ALBERNI WOODSTOVE EXCHANGE One of the largest components of winter pollution in the Alberni Valley is smoke from residential wood heat. In 2009, with the support of the Province and BC Lung, the AQC conducted a woodstove exchange program. A $400 incentive was extended to residents to help them decommission their old, smoky wood stoves and replace them with new, emissions certified models. Newer models produce 70 to 90% less smoke while burning at least 1/3 less wood. Participating retailers offered a $150 discount off the new model price and the AQC delivered a $250 rebate check to exchange applicants once their new stove was in place, and the old one was in the metal recycling bin at the landfill. The program was advertised at the Fall Fair and began officially on October 1st. By December, most of the 100 exchanges were spoken for. The program officially closed on May 1, 2010. Port Alberni’s exchange was one of the most successful in the province. 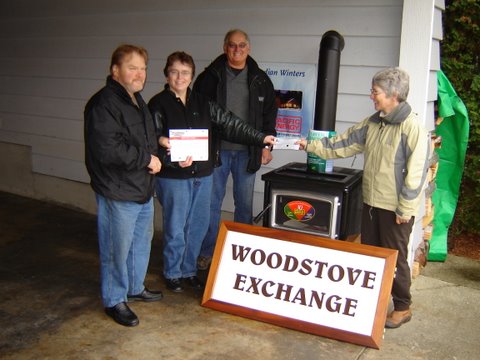 Those 100 exchanges have permanently relieved our airshed of 7 metric tonnes of fine particulate pollution. We are burning smarter and breathing easier. Article - 7 Metric Tonnes - GONE! Article - 3 Types of Clean Burning Stoves PROJECT VII - INVENTORY OF AIR QUALITY BYLAWS ON VANCOUVER ISLAND In the winter of 2010, with the support of the BC Ministry of Environment, the AQC undertook a review of air quality bylaws on Vancouver Island. The open burning bylaws from 33 municipalities within the seven regional districts of Vancouver Island were examined. Appropriate municipal contacts were sought out and invited to share information and experience regarding the development, enforcement, and maintenance of their air quality bylaws. The summary report, "Review of Open Burning Bylaws on Vancouver Island," was published in the spring of 2011. It was intended as a resource to help promote air quality protection within the City, the Regional District, and any community planning to initiate, review, or update bylaws that effect air quality management in their area. The report serves as an update to the open burning information for Vancouver Island included within, "Inventory of Air Quality Bylaws in British Columbia for Anti-Idling, Open-Burning, and Wood-Burning-Appliances," by Jennifer Alderson (2007). Report - Review of Open Burning Bylaws on Vancouver Island (2011) Inventory of Air Quality Bylaws in BC for Anti-Idling, Open Burning, and Wood-Burning Appliances (2007) PROJECT VIII - PORT ALBERNI WOODSTOVE EXCHANGE II At the end of November, 2011, the provincial government awarded the AQC with enough funding to complete another 70 woodstove exchanges. As with the 2009 Woodstove Exchange, a $400 incentive was extended to residents to help them decommission their old, smoky wood stoves and replace them with new, emissions certified models. Participating retailers offered a $150 discount off the new model price and the AQC delivered a $250 rebate cheque to exchange participants once their new stove was in place, and the old one was in the metal recycling bin at the landfill. PROJECT IX - ACRD AIR QUALITY WEB PAGES PRODUCTION The Air Quality Council has been operating in the Alberni Valley since 2003. The information posted here is a summary of the air quality work, research, and teaching done over those years. This web page was made available to the public in April, 2012 and is a welcome, central repository for the collective concerns and understanding of our airshed. PROJECT X - BURN IT SMART The Alberni Air Quality Council has hosted several Burn It Smart workshops over the years. The most recent workshop was in 2015 at the Port Alberni Fire Hall. The workshops provide smart burning skills to residents that use wood burning stoves. These skills include how to build a long lasting fire, how to season your wood, and how to determine if your wood is dry enough to burn. These skills are important in reducing the smoke emissions from residential wood burning. 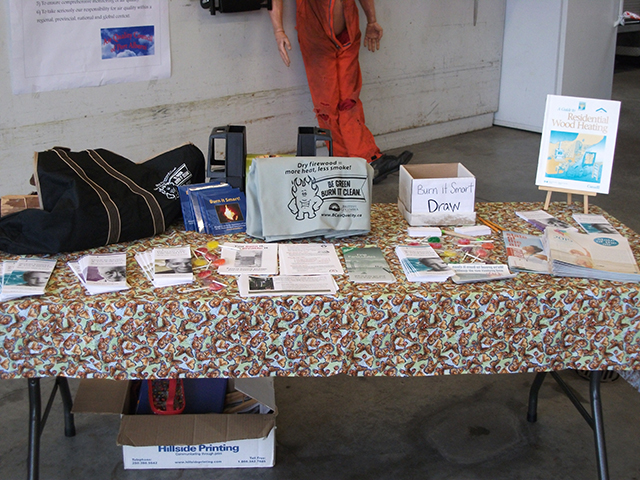 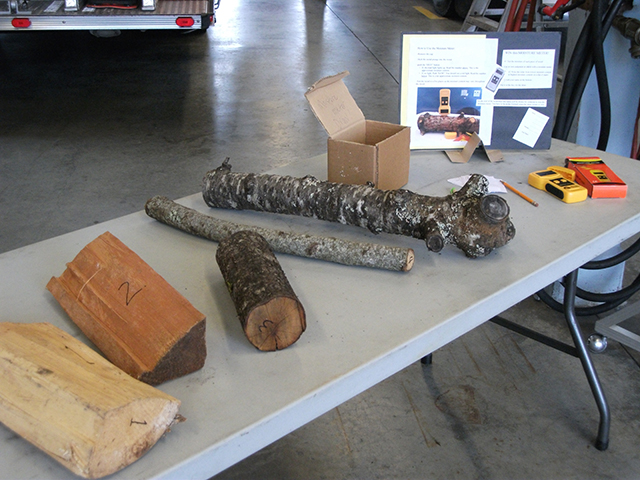